03/11/2013
I love a good storm, as the light, clouds and waves are among the best conditions for shooting the most dramatic landscapes. So, with 50mph+ winds, a high tide around sunset and stormy skies forecast for the day, we head off to the North Somerset coast to hopefully get some shots.
Arriving near the old pier in Weston-Super-Mare at around lunch time, we are met with some blustery winds, but the sea is fairly low and the waves don't seem too bad (although I later come to regret this assumption!).
The light isn't great at this point, but I still decide to head down the steps to see if there are photo opportunities. After a few minutes I haven't really got any great shots, but I'm starting to doubt my initial thoughts about the sea, as it starts to rise and the wind blows the spray of the breaking waves right over where I'm standing ... time to move, I think. So I head back up the steps, to a 'safer' vantage point to wait for the sun to drop, and hopefully transform the scene ...
Up on the top of the promenade I feel pretty safe, although a few light showers and the less than perfect light means that I don't bother getting the camera out much. Then, the wind starts to really pick up, but that's okay as I'm a good 30 feet above the sea, so surely the water won't get up here?
Suddenly, the light is transformed as the sun breaks through some cloud, lighting up the pier but the sky behind it is still dark and moody, so I set up my tripod (well weighed down with a heavy bag - I've been caught out by gusty winds and a tripod before!) and start shooting. Okay, both me and the tripod are being battered by the wind, but I'm still pretty happy, until after about 30 minutes the first huge wave hits the sea wall and spray covers me and the camera.
From here on in, it's a constant battle to get a couple of shots before the 2 stop ND grad and polariser are dotted in spray (or worse), but the light is wonderful and I'm not going to let a 'little' wind and spray dampen my spirits! The light and cloud are now changing almost every time I look up after cleaning my filters, so I stick it out for another 30 minutes before the sun disappears behind the final bank of cloud. With the taste of sea salt dominating my senses, I finally give in and back my gear away and head back to the car. Was it worth battling the elements and getting soaked a few times? Well, I think so, although I'm sure many people would simply call me a bit, er, mad. 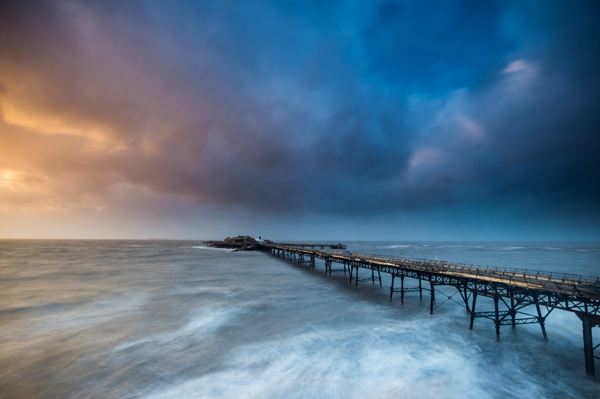 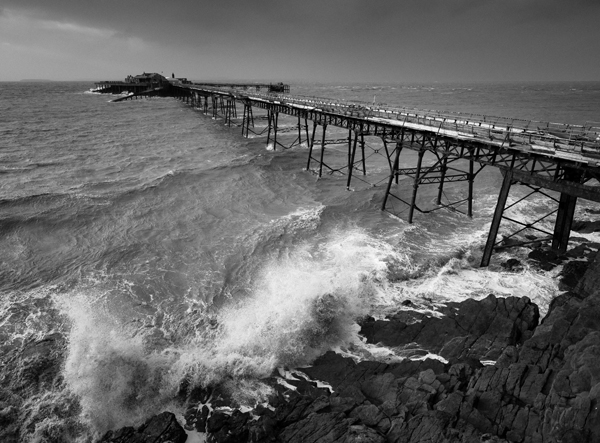