View Larger Map
This beautiful bay is located close to Abereiddy and the old slate workings known as the Blue Lagoon. The Blue Lagoon itself is a fascinating spot, as the old slate workings have been flooded by the sea, and the minerals give the main pool its striking azure blue colour (especially on a sunny day). So it’s worth giving yourself a bit of extra time to explore this area before walking on the coast path to Treath Llyfn.
To get to Abereiddy you need to take the turning (signposted to Abereiddy) just south of Croesgoch on the A487. There’s an easy to miss right turn about a mile along this minor road, then straight across a small crossroads, and the it’s just under a mile along some very narrow roads to Abereiddy Bay. Here there’s a large car park, where you join the coast path north towards the Blue Lagoon.
From the Blue Lagoon you simply follow the coast path north for around a mile, around the headland and on to Treath Llyfn bay, where you should find some steps down to the beach. (I should say here that I haven’t been since the recent storms, so I hope the steps are still in place!) If they aren’t there (or the tide is in) you can shoot from along the coast path, rather than go down to the beach itself.
Once down on the beach you’ll find all sorts of rocks and stones to use as foreground interest. It’s best to time it so that the tide is around half-way, as at low tide the most interesting rocks are high and dry, while at high tide there isn’t much beach to be seen! The bay is west facing, so it’s perfect for sunset shots, with the sun over the sea. 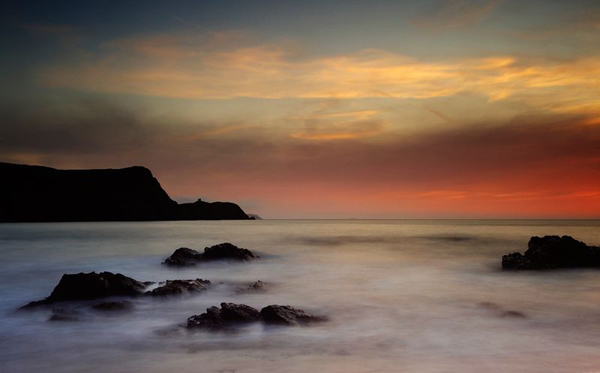