View Larger Map
It’s easy to ignore Man o’ War bay if you are visiting this part of the south coast, as it lies right next to the iconic Durdle Door. But even though it lacks the spectacle of the arch of its neighbour, Man o’ War bay is still a stunning coastal location.
Getting to this bay in the summer is easy, as there’s a car park located beyond the Durdle Door holiday park. But out of season (or early in the morning) this is often closed. So you’ll have to drive down to the main Lulworth car park. From here it’s a walk of about a mile to the west, following the south west coast path through the car park. This will take you over quite a hill, which can be a bit of wake-up call early in the morning!
You will find a large viewing area with an information board where you veer off the coast path and towards Man o’ War bay (and Durdle Door). Then follow the steps down to the left to the bay. There are some good viewpoints from near the top of the path (which are handy if the tide is in), or go down to the bay itself.
When I last visited in December 2013 the paths had been re-routed, and Durdle Door beach was closed, due to land slips on the cliffs. So you may need to take note of the notices along the path to find a safe route.
Once at the bottom if the tide is out you’ll find some good rocks to use as foreground interest, especially to the right of the bay, and a wide, sweeping shingle and sand beach.
In winter, early spring or late autumn the sun will rise through the opening of the bay, offering some spectacular photo opportunities. But during the summer it will rise over the cliffs to the east, making it harder to get great shots (although not impossible). 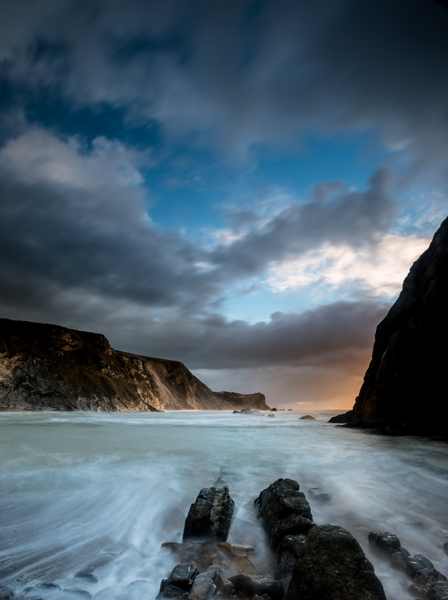