Located just south east of Whitby, Saltwick Bay is a classic sunrise location. The easily recognisable pinnacle of Black Nab at the southern end of the bay is the obvious focal point for most shots, and when the tide is out there’s also the remains of a shipwreck that you can walk out to. But walking on the rocks that make up most of this bay can be a bit of a struggle, though. They can be as slippery as ice, with rock pools and ledges to catch make it even more treacherous!
Getting down to the bay can also be tricky, as the path down the cliffs is steep and slippery in places.
Driving from Whitby you need to follow the signs to the Abbey, along Green Lane. Then at the end of this road, instead of turning left to the Abbey car park, turn right onto Hawsker Lane (signposted to Hawsker and a caravan park). Then after a few hundred metres there’s a left turn onto a lane to Whitby Holiday Park. Just before the holiday park there is space for a few cars to park, although it can be muddy when it’s been raining. (which is most times that I have visited!) The path down to the bay is just to the right of the entrance to the holiday park. 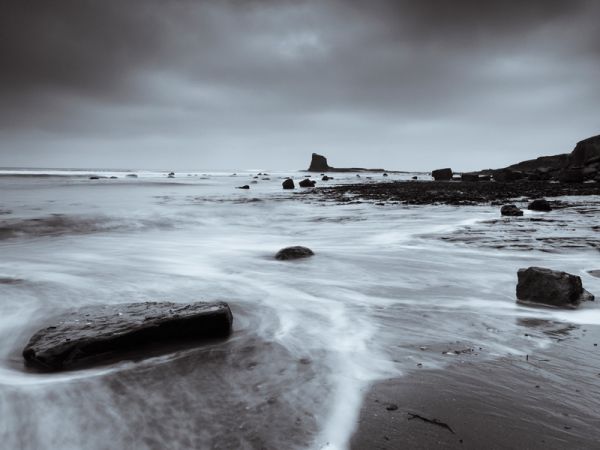