Situated on the Lizard Peninsula, Kynance Cove is one of many small, rocky / sandy bays found in this part of Cornwall.
Take the A3083 from Helston towards the Lizard and, just before you get to the village, turn right (signed Kynance Cove) and follow the road to the end where you’ll find a large car park. Out of season and early / late, there’s an honesty box, but in season the place is pretty busy and charges apply. From the car park, take the path on the opposite side of the car park to the road you came in on. This leads down to the cove. If you go at high tide, you won’t be able to get down onto the beach by following this path to the bottom, instead you’ll need to take the alternative path that branches off right a little way down. At low tide, the main path takes you down onto the beach via steps and then over the rocks. When the tide’s out, you can walk around the headland along to beach where you’ll find another little sandy bay with impressive cliffs and a rock arch. Keep a close eye on the tide as it comes in fast or you’ll find your route back has become a swim and there’s no alternative escape route up the cliffs.
The bay faces south, so it’s best shot in the winter, rather than summer, so you’ll get a view with the sun rising or setting over the sea and illuminating the shore. 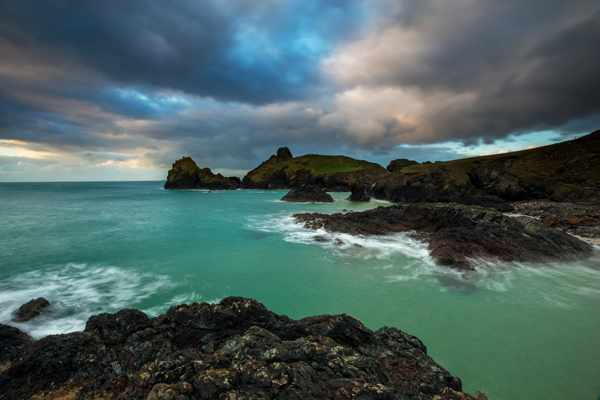